By admin on August 31, 2012Comments Off on Kangaroo Facts

Kangaroo is one of the most recognised animals in the world, even though present only in Australia and nearby islands.  Pademelons, Wallabies, Wallaroos and Kangaroos look very much the same in body structure but the distinct name is given based on their sizes. Originally Pademelons were called small wallabies and wallabies were called large wallabies. But a more suitable name was needed to differentiate them. Young ones of these groups are known as “joeys”, like many other marsupials. Adult male are referred to as “bucks”, “boomers”, or “jacks”. An adult female is known as a “doe”, “flyer”, or “jill”. A group of these animals are called a “court”, “mob”, or “troup”

Wallabies prefer to live in remote, heavily timbered areas. They are also found in the islands of New Guinea. In Australian mainland there are at least 5 species of Wallabies. A slightly different type of Wallabies is rock wallabies. It is an introduced species in New Zealand and is considered as an exotic pest there. Rock-wallabies are nocturnal and live a fortress existence spending their days in steep, rocky, complex terrain in some kind of shelter (cave, overhang or vegetation) and ranging out into surrounding terrain at night for feed.
The average life span of a wallaby in the wild is 9 years. The size of an adult wallaby can grow up to 104 cm in body length and a tail to 74 cm long. 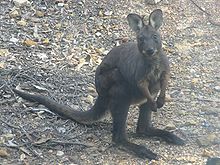 Wallaroo is intermediate size between a Wallaby and a Kangaroo. The name Wallaroo is derived from that of Wallaby + Kangaroo. This term is generally not used in Australia.

The large species is usually called a Kangaroo. There are four species that is referred as Kangaroo. Red Kangaroo, which is the largest surviving marsupial anywhere in the world. A large male can grow up to 2m tall and can weigh up to 90Kg. The other species are Eastern grey Kangaroo, Western Grey Kangaroo and Antilopine Kangaroo. Kangaroos generally hop at a speed of 20 -25km per hour but they have the potential to hop up to 70km/h.

Potoroidae family of marsupials include Bettongs , Potoroos and rat kangaroos . They resemble large rodent or very small wallaby. They move by hopping .

Tree Kangaroos are found in rain-forests of Australia .It can grow up to a size of 179cm and weigh up to 10kg. They are slow while travelling on the land. They climb trees by wrapping the forelimbs around the back of the tree and hopping with hind legs allowing forelimbs to slide.

Kangaroo Facts added by admin on August 31, 2012
View all posts by admin →

The 4 characteristics Indians should jettison and ...
Multicultural festivals in Australia
Nhill’s draught horse statue Commemorating “...
Mythri Kannada Movie screening in Melbourne
5 most famous Churches in India
Sherrin’s Child labour and Corruption in Ind...
Are you underpaid by your employer in Australia? R...