By admin on September 24, 2017Comments Off on The temple idol, no thief could get away with 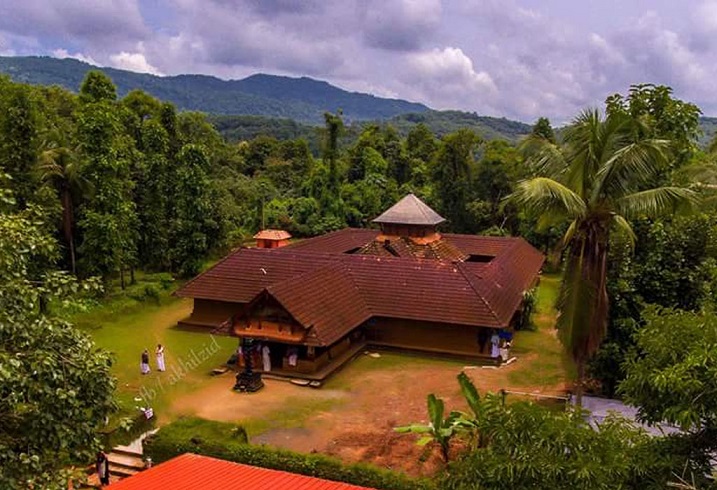 There is an ancient temple in India made famous by thieves.  Four times in recently history, thieves stole the temple idol, but returned it as they could not go far with it. The reasons they gave for that makes the story even more intriguing.

Mridanga Saileswari Temple is an ancient temple located at Muzhakunnu , Kannur district in the southern state of Kerala. The temple is among the 108 temples believed to have been established by Sage Parasurama.  There is a story behind the temple getting the name “Mridanga Saileswari”. Mridangam is a percussion instrument from India of ancient origin. In ancient Hindu sculpture, mridangam is often depicted as the instrument of choice of Hindu deities like Ganesha and Nandi, the vehicle and follower of Shiva. Mridangam is also known as Deva Vaadyam or the musical instrument of the Gods. A rock in the shape of Mridanga has fallen from heaven at this place and Sage Parasurama feeling the presence of Goddess has invoked her into the Rock and established a temple for her.  With today’s scientific knowledge, one could assume this to be a site of a meteor fall.  Mridanga Shaileswari temple is also the birth place of South Indian Classical dance, Kathakali. In this temple Goddess Sakti is present in three forms namely, Kali, Saraswati and Lakshmi.

A couple of years back, Rtd. Director General of Police of Kerala State, Shri Alexander Jacob has made public the stories of four robberies happened in this temple in previous years. The temple idol is worth around 1.5 crores (Rs 15000000) of rupees in today’s market price. With no protective security around the temple, it was an easy target for thieves. Ancient Hindu temple idols could fetch many millions of dollars as they have huge demand in overseas markets.

The first break-in at the temple took place in 1979. The thieves took the idol from the temple, but the next day morning, the idol was found to be abandoned few metres from the temple. The Police couldn’t find the culprits. The idol was re consecrated as per the rituals. The ritual lasts 41 days and requires certain mantras to be recited 41 Lakh times.

A few years later the story repeated. But this time, police could not find the idol and the investigation was stuck without any leads. The temple authorities decided to go for an Ashta mangala Devaprashna. Ashta Mangala Deva Prasna is conducted to ascertain the unknown causes of unwelcome situations and to plan remedial actions by using eight auspicious objects like ghee lamps, mirror, gold, milk, yogurt, fruits, book, and white cloth. With the deva prashna, it was deduced that the idol is travelling towards the state of Tamil Nadu and after 42 days the idol will be lost forever. But before that, the powerful idol of Goddess will return to its abode by its divine power. As predicted, on the 42nd day, Police received an information of an abandoned idol beside a highway in Palakat near Tamil Nadu with a note left behind. The note read – “The idol is from Mridanga Shaileswari Temple; we are not able to take it any further. Please return it to the temple”. Like last time, the idol was re- consecrated with rituals lasting 41 days. But the Police could not trace the thieves this time too.  Since this is the second time, Police suggested improving the security for the temple by posting a Police guard there. But the temple authorities declined the offer saying that the Goddess can protect herself.

Soon thieves struck for a third time, this time, a gang from the state of Karnataka. They planned their route through the forests of Vayanad to Karnataka to evade the Police. The Police was clueless for the next three days, but this time, both the temple authorities and the local people were confident that the Goddess will find her way back, even if the Police failed to find the culprits. On the third day by mid-afternoon, the Police received an anonymous call from a lodge in Kalpatta, Vayanad in Kerala. The caller introduced himself as one of the gang members, and gave details of the location of the idol. He requested the Police to return the idol to the temple citing that they are not able to take the idol with them. Police found the idol at the lodge, with flowers and a lighted lamp placed near the idol.  The usual rituals followed and the idol re-consecrated.

Police made a breakthrough in the second robbery attempt by accident. A gang of idol thieves from Tamil Nadu were caught when they attempted to steal idol from another temple in Cochin. They confessed stealing idol from Mridanga Shaileswari a few years back. Same way, people behind the third robbery attempt was also caught accidently when they attempted to steal idol from a temple in Kasaragod in Kerala. They confessed their role in the third robbery attempt at Mridanga Shaileswari Temple. Naturally the curious Police wanted to know, the reason behind the serial thieves, abandoning the Mridanga Shaileswari idol half way through. Both the gangs gave the same reason that astonished the Police. When they touched the idol, they lost their sense of direction and everyone entered into a confused state of mind so they could not proceed and they decided to abandon the idol half way through. The people behind the first robbery were never caught.

Three failed attempts did not deter another gang of idol thieves. This time it was a gang of seasoned thieves from a minority community in Kerala state itself. They did not believe in the supernatural powers of the idol. They also abandoned the idol. When later caught, they gave the same reason for abandoning the idol.

How to reach the temple

The Temple is Locate in Muzhakunnu Panchayat, Kannur Dist, Kerala.

By Air – The Nearest Airport is Kozhikode around 138km from the temple. Once Kannur International Airport is operational in 2018, the temple is just 14km from the Airport.

The temple idol, no thief could get away with added by admin on September 24, 2017
View all posts by admin →