By admin on May 13, 2013Comments Off on Traditional Tamil Costumes 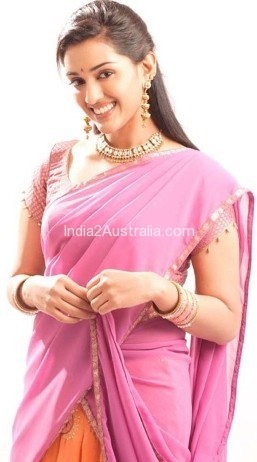 Pavadia dhavani is the traditional attire worn by young girls between puberty and marriage in Tamil Nadu.  This dress is commonly used in other parts of South India. It is called Langa voni in Telugu, Langa Dhavani in Kannada and widely known as half saree. This dress has a pavadai or skirt which is tied around the waste using a string and a davani, a thin material cloth of around 2.5 metres draped diagonally over the blouse.

The Brahmin woman in Tamilnadu usually wears their sarees in Madisar style.  Normally sarees are 5.5 metres (6 yards)  in length but to wear a saree in Madisar style it has to be slightly more than eight metres(9 yards) . Now a days a version of Madisar is tied using 5.5 metre( 6 yards) sarees. It is an important part ofGurukkal , Iyer and Iyengar culture and they wear sarees in Madisar style during all important occasions like wedding s, pujas etc. Iyers and Iyengars wear Madisars differently.Gurukkal and  Iyers drape the Pallu (the layer of sari which comes over one’s shoulder) over the right shoulder while Iyengars wear it over the left shoulder.  The nine yards saree in the original madisar style is worn without a petticoat, under skirt or blouse. 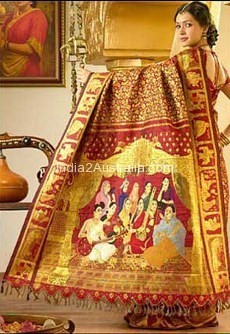 Sarees woven from Kancheepuram, TamilNadu are protected by a Geographical Indication label, certifying their origin. According to legends ,Kancheepuram silk weavers are the descendants of Sage Markanda, who  have woven tissue from lotus fibre. Today Kancheevaram silk sarees are famous all around the world and are expensive. The method of weaving a kancheevaram Saree is  slightly different from the usual method of weaving sarees. Three shuttles are used for weaving Kancheepuram sarees. The border design in woven separately and later joined to the saree.

Modern costumes of Tamils in India

Men usually wear a shirt and a lungi at home whereas Office attire is shirt and pants. Women mostly wear Saree, churidar or western outfits.

Traditional Tamil Costumes added by admin on May 13, 2013
View all posts by admin →